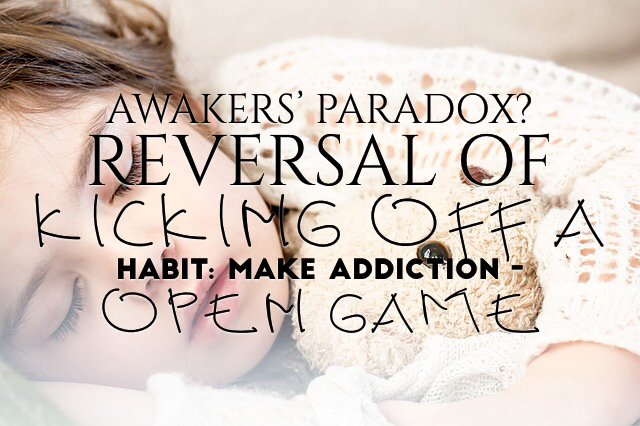 I am so sorry for delaying this post. It took me some time to finish my work in real life and reading up the book. Then I found out this book would co-relate with another book. I wanna share information which could be useful to Awakers. That’s why I can only get to post new stuff now.

So I need to finish one then concurrent refer back to another one.

You may find it strange. Why is Awakers Syndrome gonna do with the power of habit then? This book caught my attention when I visited a bookstore. It intrigued me to take few flips and quick glance on it.

These two books have sparkled the hypothesis in my mind that may work for Awakers. Like a kid getting a new toy, I shared couples of habit loops with Dutchy and suggested her reading them. Then Dutchy asked “is there a sleep habit loop?”

Due to the huge amount of information, this is going to span like more blog posts or episode series. Please bear with me. There are some of the enlightenments and realisations I hit upon are interesting for you to further research on and take action.

I have divided these series into two parts: 1. OnSleep Habit Loop (Cues, Habit Routines and Rewards) 2. The Practise on Your Will like muscle

While I was reading The Power of Habit - Why We do What We Do In Life and Business by Charles Duhigg, there was a story captivated my eyes and sparkled new idea on Awakers Syndrome.

The Story: A guy named Eugene, suffered from viral encephalitis. Usually, it was mild flu-case and symptoms. But his was a rare case. Eugene got into coma and it almost took his life. The virus damaged his brain. Finally, he was alive. But the damage could not be undone. The part of brain damaged affected tasks like recall of the past and regulation of some emotions. The neuroanatomy scientist, Larry Squire was intrigued by how his work with Eugene would reveal and reshape the understanding of how habits function. He conducted experiments to find out the limits of Eugene’s memory. Eugene couldn’t hold new information for more than a minute and he could not recall that he had a brain damage. However, he could remember most of the events in his life happened before 1960 and his intelligence was still sharp.

Something more, when Squire visited Eugene, he requested him to draw a map showing the location of kitchen or bedroom, he could not do it. But he could easily walk to the bathroom, flushed the toilet and washed his hands.

And further more, Eugene moved to a new house. The doctor advised his wife that he needed exercise. His wife would walk him around the block every morning and afternoon on the same path. There was once Eugene slipped out of the door when his wife was getting prepared to have a walk with him. She scanned all neighbourhood and knocked on doors to find her husband. Out for everywhere for 15 minutes already, she decided to run back to call the police. Rushed through the door, she saw her husband was sitting watching TV. His fingers was sticky with plant fluid. Eugene had gone for a walk himself and he GOT HIS WAY HOME BY HIMSELF.

And since then, he was going for a stroll every morning. And his wife found it was useless to stop him.

What has been enthralling to me: So Eugene had been absorbing new information and forming new habits in spite of his brain physical defect! Our brains are much more powerful that we thought they were!

Encephalitis (en-sef-uh-LIE-tis) is inflammation of the brain. There are several causes, but  the most common is viral infection. Encephalitis often causes only mild flu-like signs and symptoms — such as a fever or headache — or no symptoms at all. Sometimes the flu-like symptoms are more severe. Encephalitis can also cause confused thinking, seizures, or problems with senses or movement.

Rarely, encephalitis can be life-threatening. Timely diagnosis and treatment are important because it's difficult to predict how encephalitis will affect each individual. - Mayoclinic.org

There has been an enthralling question that sparkled in my mind: If Eugene could absorb new information and forming new habits REGARDLESS of his brain physical defect, so Can Awakers Form Irresistible Habits that has become addictions and totally become automatic REFLEXES that their body omit or negate the Awakers Syndrome or maybe even make it occurs less frequently?

My Hypothesis is that it is truly possible and it is worth trying:

This is my hypothesis as I don’t know if anyone has said this before. It is a suggestion as it doesn’t hurt to try out for Awakers. And there will be tweaks I am going to share in the series of blog posts. Hope you all like it. You can leave a comment if you like.