Mental Muscle Build-Up for A Better You Than Yesterday 1

Mental Muscle Build-Up for A Better You Than Yesterday 1 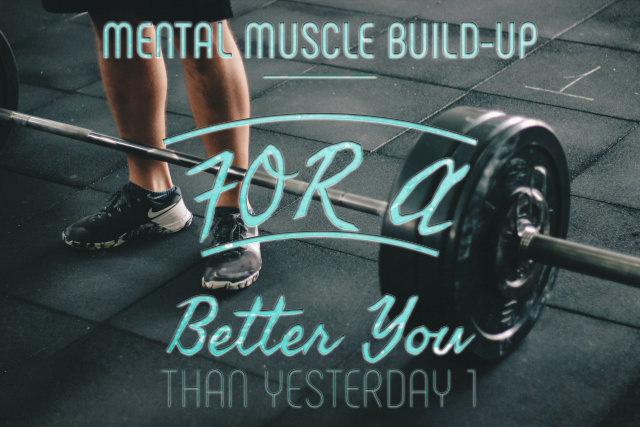 Sorry for the slight delay. Tada! Finally, I hope I still keep you all enticed! I would like to thank Kayla… Thank you Kayla. I think you mentioned about my website in your blog. Thank you.

Some of you may have known Kayla. For those who hasn’t, you can find out about her in my other post and even say hi to her in her IG. :)

Let’s review the keywords in previous post on this topic:

Special Key element for success in changing: Will and belief in yourself that you are in control(You are the Boss!)

- To provide with a motive, something (such as a need or desire) that causes a person to act

“Motivation is more like a skill, akin to reading or writing, that can be learned and honed. The trick researchers say, is realising that a prerequisite to motivation Is believing we have authority over our actions and surroundings.” - The Power of Habits by Charles Duhigg

To motivate ourselves, we must feel like and really believe firmly that we are in control. You believe you can turn things around.

Everyday you work out and your muscle will be built up little by little. You don’t need to climb the Mount Everest in one day, you just need to take one more step ahead of yesterday.

Locus means the concentrate all points into one central area. In other words, all your attention of control to be focused into one.

Those with a strong “internal locus of control” - a belief they could influence their destiny through the choices they made.

Question: When your kids/your team members/employees are doing well in sports or school or in work, how are you going to praise them ?

Are you going to say…

“you are so smart or brilliant!” Or

“Good work and you did it well” and “You have put in great effort to perform so well!” ?

Studies show that someone’s locus of control can be influenced through training and feedback. An experiment conducted in 1998. 128 fifth graders……

Praise for intelligence can undermine children's motivation and performance

Published in Journal of Personality and Social Psychology 1998

This has rippled into the further mental developments in these kids and what has been installed into their minds. It depends on how they have been brought up and believe in. For those who had been hearing their efforts paid off, they would believe that they have more control over the surroundings than those had thought their intelligence paid off. Efforts is something they can work on but for intelligence is in-born(things can’t be changed).

““Internal locus of control has been linked with academic success, higher self-motivation and social maturity, lower incidence of stress and depression, and longer life span.” A team of psychologists wrote in the journal Problems and Perspectives in Management in 2012.

“internal locus of control is a learned skill,” Carol Dweck, the Stanford psychologist who helped conduct that study, told me. “ Most of us learn it early in life. But some people’s sense of self-determination gets suppressed by how they grow up, or experiences they’ve had, and they forget how much influence they can have on their own lives.

“That’s when training is helpful, because if you put people in situations where they can practice feeling in control, where that internal locus of control is reawakened, then people can start building habits that make them feel like they’re in charge of their own lives and the more they feel that way, the more they really are in control of themselves.” “

- The Power of Habits by Charles Duhiggs

Conclusion: Next time, when your employees, team members or your kids are doing well, you know what to say.

Question: How do you keep yourself motivated? How will you really move yourself and start taking actions ? Example taken from The Power of Habits

Studies like the seemed to hold the key to teaching recruits self-motivation. If he redesign basic training to force trainees to take control of their own choices, that impulse might become more automatic, he hoped.” Today we call it tearing ‘a boa toward action’.” “the idea is that once recruits have taken control of a few situations, they. Start to learn how good it feels.

“We never tell anyone they’re a natural born leader.’Natural born’ means it is outside of your control,’ Krulak said. “Instead, we teach them that leadership is learned, it’s the product of effort. We push recruits to experience that thrill of taking control, of feeling the rush of being in charge. Once we get them addicted to that, they’re hooked.’

Quintanilla finished boot camp in 2010 and seven in the Corps for three years. He then left. He was finally ready, he felt, for real life. He got another job, but the lack of camaraderie among his colleagues was disappointing. No one seemed motivate dot excel. So in 2015, he reenlisted. “I missed that constant reminder that I can do anything,” he told me. “I missed people pushing me to choose a better me.”

The choices that are most powerful in generating motivation , in other words, are decisions that do two things: They convince us we’re in control and they endow our actions with larger meaning. Choosing to climb a mountain can become an articulation of love for a daughter. Deciding to stage a nursing home insurrection can become proof that you’re still alive. An internal locus of control emerges when we develop a mental habit of transforming chores into meaningful choices(climb a mountain =>love for a daughter), when we assert that we have authority over our lives.”

- The Power of Habits by Charles Duhigg

Chief Editor’s special note: I met an old friend online. Before having met him, I didn’t know that I have lost drive in life and not to mention about why. I have a well-to-do life but I always have exciting projects to work on. Like a kid always have the craving eyes for new ideas… Then he told me some exhilarating real news on how people make extraordinary transformation in real lives… changed the policies in tough political situations. Then I knew what happened to me. I got myself too deep into the darkest side of this real world… I nearly lost my self.

I thought I could share something useful with you guys. But this journey has enlightened me and give me breakthroughs in life! Thank you!

Conclusion: Now, you may be more enlightened on how to motivate yourself better, RELATE and HOOK your intent(you inner desire) with your call-to-actions.

PS: Motivation and Locus of Control are covered here. The next one will be a bigger topic on Will. Please Stay Tuned.