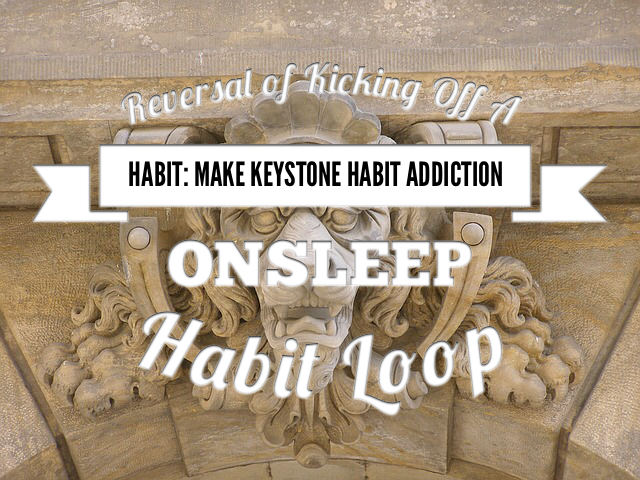 Our internal circadian sleep cycle is the time you supposed to sleep according to biological clock in your body. It is from 10pm-12am  to 5-9am for sleep routines. For Awakers, their sleep routines have been messing up, like  sleepy during daytime and can’t get to sleep during nighttime.

Before this, there is story needed to shared about Keystone Habit

(or Anchor Habit if it is easier for you to relate to):

Lisa Allen, started smoking and drinking when she was 16, struggled with obesity for most of her life. At her mid-20s, she had $10k debt and her longest job was less than a year. Till date, she lost sixty pounds, lean and vibrant, started a master degree and bought a home, no outstanding debts, didn’t drink and smoke and has been working for more than 3 years in the same firm. Bewildered by her drastic change from destructive habits, neurologist, psychologists, geneticists and a sociologist funded by National Institute of Health had prodded to research on. Together with two dozens of people in eating, smoking, drinking and shopping destructive habits, the scientists wanted to understand how all participants had remade their lives in relatively short period of time.

With all that mentioned above, her husband came home and told her he was leaving her. Devastated by the divorce and betrayal, she obsessively spied on him and harassed his new girlfriend. Her life was in turmoil. She used credit cards had yet maxed out to go to Cairo. Drowned in shame, helplessness , depression and anger at once, she was disoriented that one morning, she smelled burning plastic.. she was lighting on a pen but not a cigarette. She felt like everything she had ever wanted had fallen apart. She couldn’t even smoke right. She was desperate, like she had to change something, at least one thing she could control. Specifically, she wanted to quit smoking.

By focusing on ONE pattern, which is known as KEYSTONE HABIT, Lisa had got herself how to remake other routines and further transformed her life totally.

a central stone at the summit of an arch, locking the whole together.

• the central principle or part of a policy, system, etc., on which all else depends: cooperation remains the keystone of the government's security policy.

• secure firmly in position: the tail is used as a hook with which the fish anchors itself to coral.

• provide with a firm basis or foundation: it is important that policy be anchored to some acceptable theoretical basis.


Let’s make our internal circadian sleep cycle as the KEYSTONE HABIT. From now on, we called it OnSleep Habit Loop.

I have talked to Kayla Douglas. She is a Certified Life Coach and hold further certifications in CBT (Cognitive Behavioral Therapy), NLP (Neuro-linguistic Programming), EFT (Emotional Freedom Technique) and Reiki. She has been living with narcolepsy many years. She stood out among others who blogs about Narcolepsy.

A little brief on how I met her online: One year after I have created www.awakers.club, I thought it was time for me to amplify exposure for this website. SoI made a new Instagram account for www.awakers.club. This has opened a whole new world and really get my feet wet for it. It granted me a chance to understand more and share more emotions with Awakers.(People who have Narcolepsy). Among those bloggers and activists with Narcolepsy, she stood out as she has been nakedly sharing her breakdowns and breakthroughs with Awakers Syndrome. I found her inspiring blog www.kaylamdouglas.com was sharing good tips on managing Awaker Syndrome. The blog is her life journey with Awakers Syndrome. Her tremendous tenacity and courage has touched my heart. She is a little shy, sometimes has a little doubt of herself. Yet her firm belief in managing Awakers Syndrome attracted me to talking to her more.

I have ever said this to Dutchy if it is possible to manage Awakers Syndrome without any medicine. She said it was not easy. Kayla Douglas has been the only I came across on managing it without medicine. She is a living proof I have come to know so far.

She shared with me that the routined sleep cycle(10pm-12am  to 5-9am )will help and there will be fewer sleep attacks for Awakers in the day. But that alone is not enough. I agree. But we need to start focusing on one habit first, the keystone habit. That is OnSleep Habit Loop. Let’s get started…